I have to apologize. I have not kept my reading widget updated (on the right side of blog page). It is updated now and reviews of the books that are no longer on the list because I finished them will follow over the next several days. Sorry about the delay.

Posted by Matt Mashburn at 4:30 PM No comments:

We are still really having a great time with the Wii that the kids got for Christmas. We decided tonight that we are getting rid of our living room furniture so we will have more room to play. If you are interested in any of the pieces, just post a comment. We are willing to trade the whole group for a second wii controller. We are tired of swapping controllers. We could also use ice packs, ace bandages, and any emergency room connections you might have. 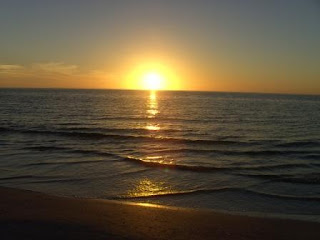 Posted by Matt Mashburn at 10:30 PM No comments:

A Few Pics from our Trip So Far

This is where the day starts with a little reading, thinking and conversation with God: 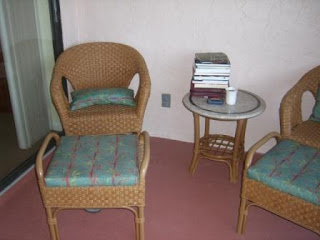 This is the view from there: 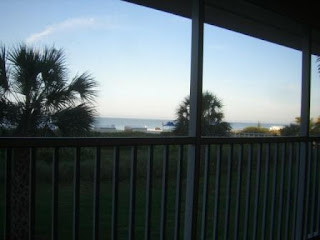 This is my spot on the beach (a little more reading, zune, and playing with the kids): 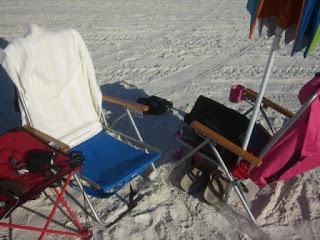 and the view from there: 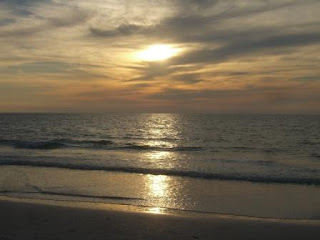 We had a great Christmas morning at the Mashburn house. Melissa and I were fortunate enough to score a Nintendo Wii for the kids this year. They had no idea we got it and were so excited Bailey actually screamed when they opened it. The fun did not stop there, though.

I used to be a big gamer as a kid but have never been very interested in video games as an adult. The Wii will change all that. What an amazing game system. The way you actually act out the motions to play the games is amazing. I got so tired from playing that I actually was wishing there was a game you can play sitting in your chair.

I also think I rediscovered some old sports injuries. I think I will actually be sore in the morning.

We got to Marco Island tonight (and brought the Wii). We are looking forward to some beach and wii time over the next few days.

Going to bed with sore elbows,

Posted by Matt Mashburn at 11:08 PM No comments:

I know it has been a while since my last post. I will be back soon, but I wanted to pop on tonight and wish everybody a Merry Christmas.

Tonight we went to Christmas Eve Services and then watched "The Nativity Story" together. We are off to Marco Island tomorrow after the gift opening festivities in the morning. I am sure that will provoke some blogging.

See you all soon.

We Are The Champions!

Sorry it has been almost a week since my last post. I have started my new company/job. More on that later. First, I want to share some exciting news.
Five years ago, myself and Sammy Waller started a softball league at Flamingo Road Church. It started with about 120 guys playing on 8 teams. Since then we have played 7 seasons (twice a year for 2 of those years) and this year we had 16 teams with about 250 guys playing. I have seen a lot of guys get connected to church and God through the league.
Since the beginning, I have had good teams and bad teams, but never won a championship. This year, that all changed. Last Thursday night, we won the championship. It was a great night and something I have been waiting for. We all celebrated and had a great time. Here is a pic of the team with the monster trophy: 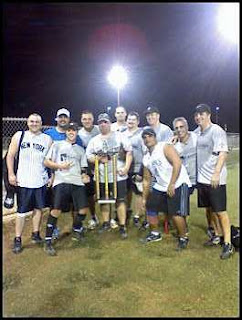 Sorry about the quality, it was taken by my son with his camera phone.
I just wanted to post this to say thanks to all the guys that have played with me throughout the years and to celebrate success.

I recently realized how catchy some TV show theme songs are. I took the liberty of capturing a few . Below are my top 5 right now, not in any particular order.

Posted by Matt Mashburn at 6:19 PM No comments: As part of my daily reading, I read a book to help me be a better father. This is a part of my life that is not intuitive for me. I tend to be very busy and therefore miss some of the cues that I should pick up on. This book helped me a lot with that. The best part about this book is that most of it is broken up into chapters that take on one challenging topic for teens. Not only is it a great sequential read, but it is a great reference tool. The solutions were very realistic, unlike may parenting books. I definitely recommend it for those who are raising teens - boys or girls. It gives equal time to both gender's issues. 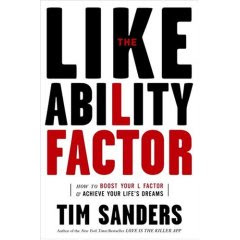 Tim's first book "Love is the Killer App" is one of the best books I ever read, so I came into this one with high expectations. You know how sometimes when you go to see a movie that everyone has told you is great, it turns out to be just OK and you wonder if it was because your expectations were too high? This book was like that for me. It is a good book about relationship building which is one of the 3 principles in his first book, but this one did not knock my socks off. However, if you struggle in this area, it does have some great info. Bottom Line - read his first book and go from there.

Posted by Matt Mashburn at 3:06 PM No comments:

I blogged about this book when I first started reading it because I thought it was going to be a great book. It did not disappoint. A great book to help you get organized and productive. I HIGHLY recommend it for everyone. The major premise is to create organizational systems for the things you need to get done, so that your mind can be freed up for creativity, relaxation and true productivity. If all your important tasks are in a system, you will not waste valuable brain power trying to remember the things you need to do or worrying about forgetting to do them.
Pick it up - definitely worth the read.

Posted by Matt Mashburn at 5:29 PM No comments:

Today Auburn beat Alabama 17-10 in the Iron Bowl for the sixth year in a row. It is the biggest game of the year for us. Back home, they are calling it a 6-pack.

Posted by Matt Mashburn at 11:38 PM No comments:

The Battle is won

Even though it was quite cold, the annual Thanksgiving football game went off without a hitch today. The field of warriors looked like this: 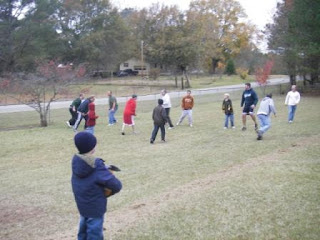 This is an action shot of one of the plays: 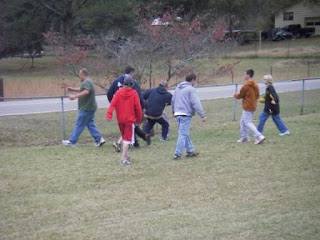 This is the winning team in a full battle strategy session: 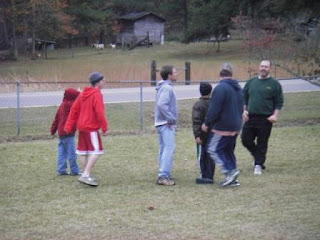 and the other team scored 28 pts. 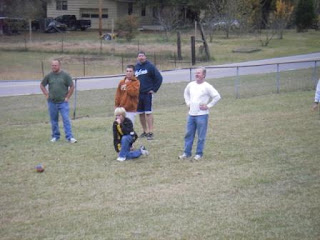 Another great Thanksgiving day battle. No injuries. One faked.

Posted by Matt Mashburn at 1:00 AM No comments:

Today we went up to my grandmother's house to help her do some things around the house and prepare the field for our annual football game. Here are some pics and notes. Here is Bailey working hard: 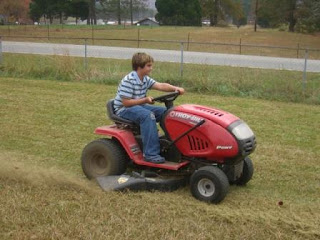 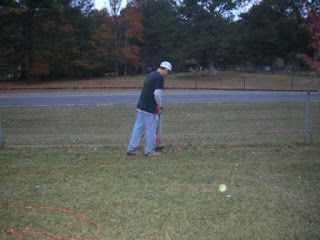 My brother-in-law, Pat, removing a tree that has always been in the field but was just getting too big: 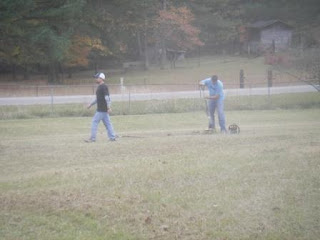 This is me putting the finishing touches on the field: 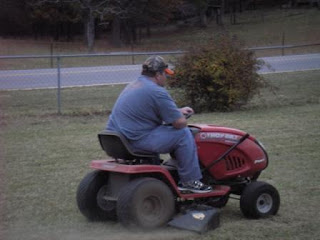 And this is the rest of the crew working on various tasks: 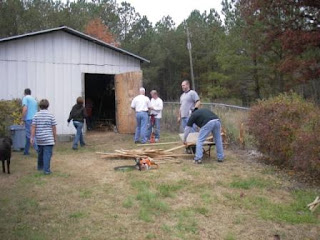 After half a day of hard work, the field is ready. Here is what it looks like before the battle: 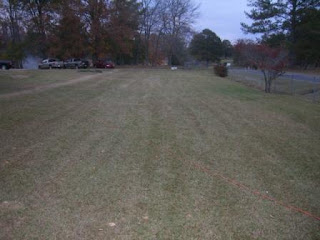 Notes from the battle tomorrow.

Posted by Matt Mashburn at 12:40 AM No comments:

Tuesday, I got to play 27 holes of golf with my dad, my brother, and my brother-in-law. What an awesome day. This is a view from the first tee. Yes, that is the fairway below. 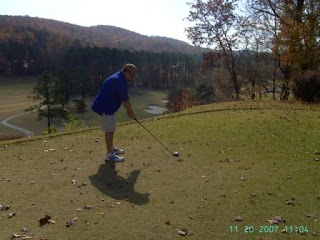 This is my dad helping my brother: 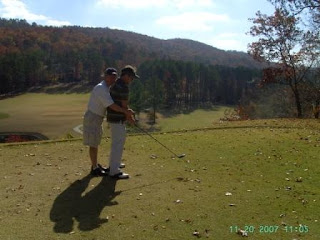 This is the par 3 where I hit into the water 3 times in a row: 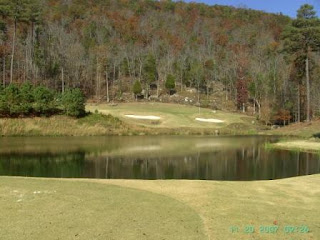 This is just a great pic of a hole: 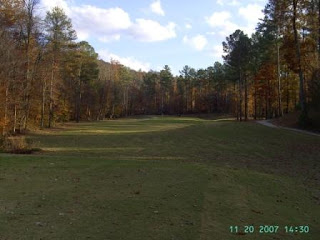 This is an even better pic of a hole: 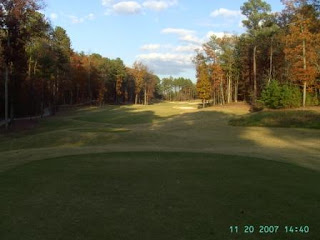 Another great day in Alabama.

Posted by Matt Mashburn at 11:47 AM No comments:

I always like to share where thinking, reading, and talking to God goes on on my trips. Here is my spot in Alabama: 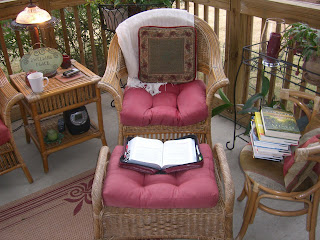 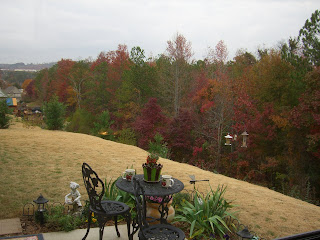 Thanks to my parents.

Posted by Matt Mashburn at 12:37 PM No comments:

We made it! We are in Alabama for the next 7 days. On the way we crossed two state lines: 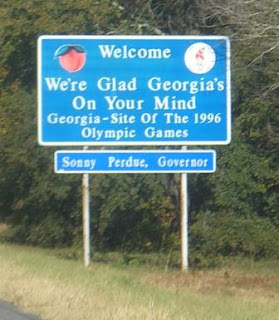 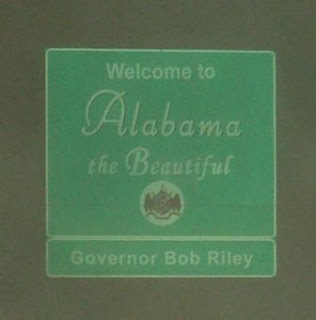 saw what fall looks like (note the trees changing color) 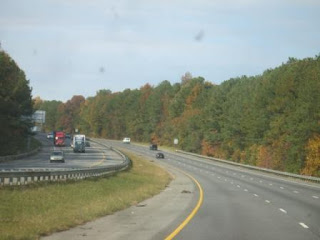 and did a little shopping.
Not a bad trip at all, but 13 hours in the car is never fun.
Nick and Bailey got a new bed mate: 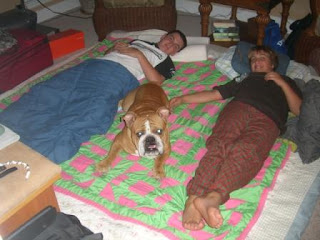 and we are looking forward to a great visit.

Posted by Matt Mashburn at 12:40 AM No comments: