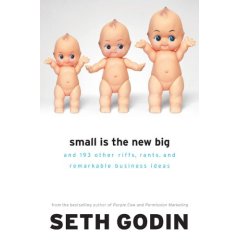 Over the last 80 days I have endured some good-natured ribbing about the fact that I have disapeared from the blogosphere. My response was that I lacked inspiration and refused to post just to check it off my list (as I am prone to do). Over that time I have experienced some level of guilt as well as a sense of neglect for abandoning theblog I started with such earnest. Alas, inspriation came last night in the form of Seth Godin's book "Small is the New Big and 183 other riffs, rants, and remarkable business ideas." Seth points out that if you have something to say, most of the other mediums are watered down, leaving blogging as one of the remaining pure forms of communication. E-mail is watered down by spam, snail mail is watered down by speed (or lack of - hence the moniker "snail"), telecommunication is watered down by being so cumbersome. Blogging is efficient, lacking distraction, simple, and readily available to those who are interested in what you have to say (and hopefully there are those people). So all that is to say "I'm back" and ready to share my random musings. Incidentally, I have also spent the last few days relaxing on the beach reading books, which lends itself to refocusing on some things. I am fired up and ready for 2007. 2006 has been an amazing year and I am sure 2007 will be even better. I leave you with the view from my beach chair and the promise to muse more. 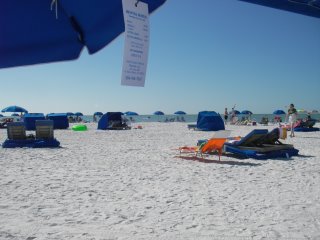 Posted by Matt Mashburn at 9:44 PM No comments: