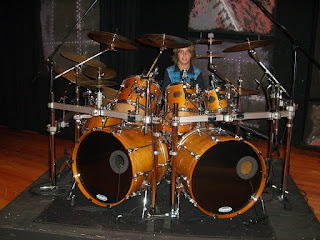 Today Bailey made his public debut on the big stage. Maybe it was a glimpse into the future when he will be up there on the weekend during the services. For now, he played for the school audience in the FRCA talent show. Above is a picture of him on the kit. It was cool to see him up there doing his thing both as a drummer and as a 10 year old willing to put himself out there in front of all those people. It took a lot of courage to do that. Thanks goes out to his drum teachers – Cory Farver (his first teacher who went off to college) and now Pastor Igor (who somehow finds the time to squeeze the lessons into his schedule). You guys have helped Bailey find something he is truly passionate about and I will be forever grateful for that. It is cool to see your kids grow up, but you also realize how fast it happens.